This seems to be the summer for pizza crust experiments at Chez Kalyn, and this recipe for Vegetarian Zucchini-Crust Pizza Margherita was inspired by the Cauliflower-Crust Vegetarian Pizza I made last month.  After trying that pizza with a crust made of cooked cauliflower, cheese, almond meal, and an egg, I started wondering why you couldn’t make a similar type of crust with zucchini.  Jake was skeptical, and it did take us two tries to get a crust we were happy with, but we both loved the way the zucchini added flavor to this crust and really complemented the simple tomato sauce, fresh basil, and fresh Mozzarella that are the traditional toppings for Pizza Margherita.  This is a pizza recipe that’s not only vegetarian, but also gluten-free and low carb and it’s another answer to that zucchini problem that so many people have this time of year.

We cooked this crust on a pizza stone on the grill (just like we did the Cauliflower-Crust Vegetarian Pizza), but I’m sure you can also cook it in a hot oven, with or without a pizza stone.  Even if you don’t have a garden, try not to skip the fresh basil on top, because that adds a lot of flavor to the pizza.  This pizza is so delicious that no one will care that there’s no meat, and I think this is a perfect Meatless Monday dinner.  (You can find more meatless recipes by using the label Meatless Monday or checkingVegetarian Recipes in the recipe index, and I’m also doing a meatless slow cooker recipe each Monday on Slow Cooker from Scratch.  For more Meatless Monday ideas from other bloggers, check Meatless Monday at BlogHer, where I write a weekly post spotlighting one of the fabulous meatless recipe ideas I find around the web.) 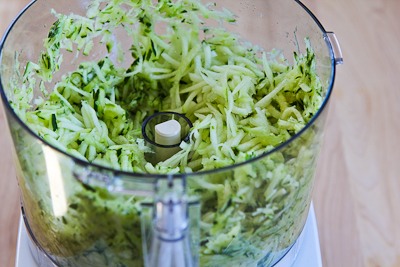 Use a food processor, or the large sides of a hand grater to grate the zucchini. 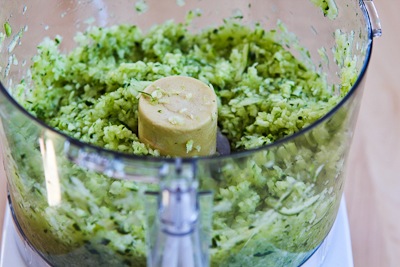 Then put the zucchini into the food processor with the steel blade, and chop it more finely.  (If you don’t have a food processor, use a large chef knife for this second chopping. 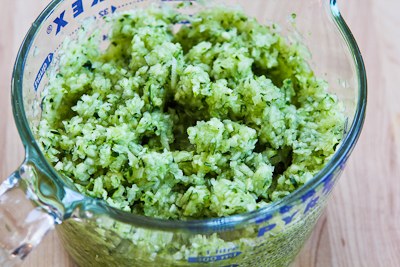 Once the zucchini has been grated and then chopped, you need 4 cups to make the two small pizzas in this recipe. 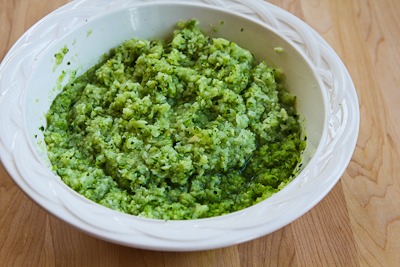 Put the zucchini in a microwave-safe bowl and microwave for about 5 minutes on high. 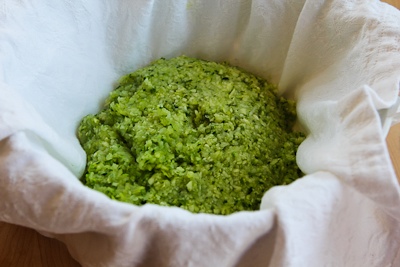 Then put a piece of cheesecloth or a kitchen towel inside a colander and let the zucchini drain while it cools. 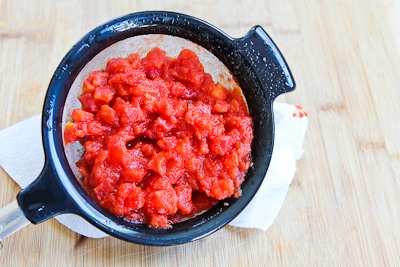 While the zucchini cools, make the sauce.  Start by draining a can of good-quality petite-diced tomatoes. 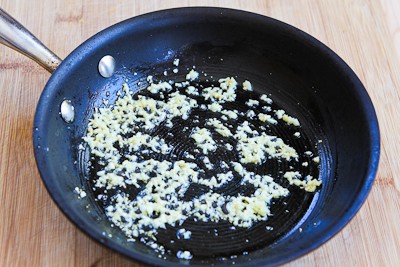 Saute the garlic in half the olive oil, just until it’s fragrant. 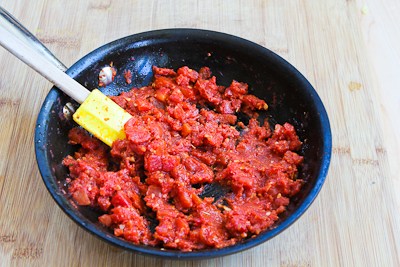 Then add the drained tomatoes and Italian seasoning and let the sauce cook down over low heat.  (Just before using the sauce, stir in the rest of the olive oil and season to taste with salt and pepper.) 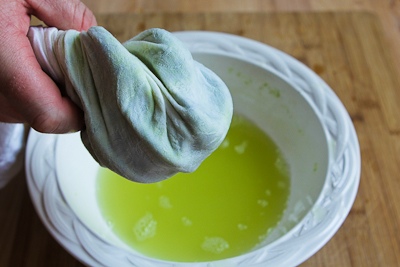 When it’s cool enough to handle, use your hands to squeeze as much water as you can out of the zucchini. 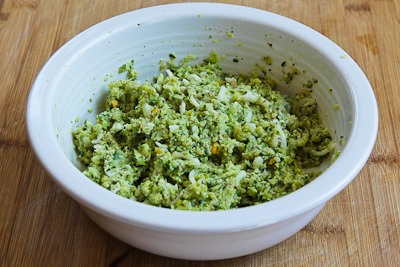 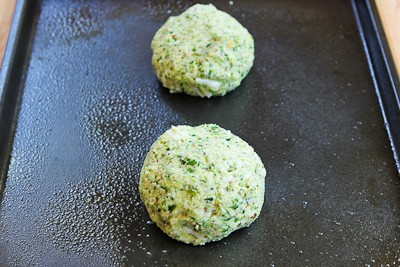 Spray a baking sheet with olive oil or nonstick spray and divide the crust into two balls. 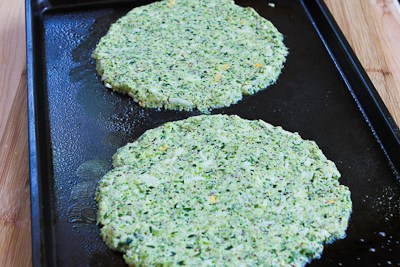 Then use your fingers to press the mixture out into two crusts, taking care not to make the edges too thin. 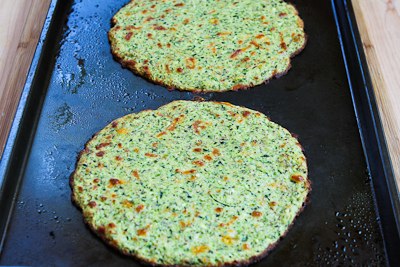 Here’s how the crust looked when it came off the grill. Top each pizza with half the sauce, fresh basil leaves, and chunks of fresh mozzarella. 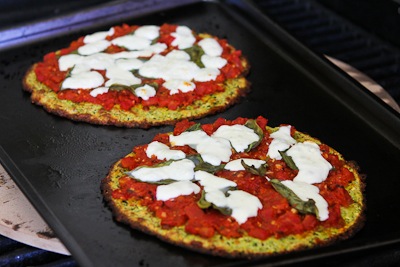 Preheat the grill or oven to 450F/230C.
Grate zucchini, using a food processor or the large side of a hand grater, then chop the grated zucchini.  (I did this with a steel blade in the food processor, but you could chop with a large knife if you don’t have a food processor.)  Place the chopped zucchini in a microwave-safe bowl and microwave on high for about 5 minutes.  Then drain the cooked zucchini into a colander that’s lined with cheesecloth or a kitchen towel.  Let zucchini drain until it’s cool enough to handle.
While the zucchini cools, make the tomato sauce.  First, drain the tomatoes into a colander placed in the sink.  While the tomatoes drain, chop the garlic, heat half the olive oil in a very small frying pan, and saute garlic just until it’s fragrant.  Add the drained tomatoes and Italian seasoning and let the sauce simmer on very low heat until the crust is done.  (Just before using the sauce, stir in the rest of the olive oil and season to taste with salt and pepper.)
When zucchini is cool, squeeze out as much water as you can and place the zucchini in a bowl.  Add the finely grated Mozzarella, almond meal, Parmesan, dried oregano, garlic powder, salt, and beaten egg and stir until the ingredients are combined.
Spray a baking sheet with olive oil or nonstick spray and divide the crust mixture into two balls.  Use your fingers to press out the crust mixture into two circles, being careful not to make the edges too thin (or they will burn).  Bake crust on a pizza stone (on a covered grill or in the oven) just until the crust is firm and starting to brown (about 12-13 minutes.)  You can also bake this in the oven without a pizza stone, but it will take a little longer to cook.
Spread each small pizza with half the sauce, then top with half the basil leaves and half the fresh Mozzarella chunks.  Put pizzas back into the oven or on the grill and cook just until the cheese is nicely melted, about 3-5 minutes more.  Serve hot.
From  : kalynskitchen

Spinach and mushroom quinoa sauteed in garlic and olive oil. I’ve made this delicious dish over this past weekend and it was so good, I can’t wait to share this simple recipe. Not only is it super tasty, this quinoa dish is healthy, low in carbs and calories, high in fiber, it’s gluten free, vegetarian,...

How To Make Homemade Chicken Parmigiana