Orange Cupcakes on the Grill? Were They Any Good?

Before you think my orange cupcakes grilled in an orange were just another kooky failed experiment, I want to say right up front that these were delicious. I made plain vanilla cupcakes but because they were grilled in the orange, they took on an orange flavor and gained a lot of moisture.

Bride 2.0 called baking in the orange “ingenious” and my friend and taster extraordinaire, Ran, said the cupcake in an orange was “the most fun I’ve had eating a cupcake in a while.” Ran complained a bit about the texture. It was a bit different than normal because of grilling, but overall they were a hit. Bride and Groom 2.0 both preferred the vanilla cake grilled in the orange to the same cake in a normal cupcake liner. However, I am not going to be grilling cupcakes for their wedding.

Where Did I Get the Idea to Grill Orange Cupcakes in an Orange?

The idea for these orange cupcakes made in an orange came from Sylvia, a friend/reader. Sylvia left a comment on my packing peanut post saying, “I was talking to a park ranger about outdoor cooking once and he mentioned a great way to make a cupcake-like thing at a campsite — bake a spice cake mix in a hollowed out orange over coals or fire (I can’t remember which).” As soon as I saw her comment, I knew making cupcakes in an orange was in my future.

I had no plans to go camping, but I figured a grill was the second best thing.

How to Grill Cupcakes in an Orange

To grill cupcakes in an orange, you’ll need the following: 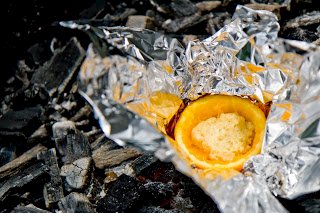 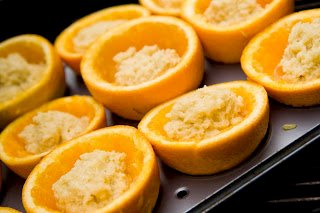 Before we get into talking about gooey and sweet dessert pizza I need to thank you for being such awesome grill buddies. We have come to the final week of Get Grillin’, Cookin’ Canuckand I had a blast collaborating with you for our first virtual summer BBQ. We have worked our way through 5 weeks of savory...

Red Velvet Cupcakes In A Jar

I know, I know, I’ve said it a gazillion times, I don’t really do the girly pink thing for Valentine’s Day. Having two 8-year old girls in the house over Valentine’s Day weekend quickly changed things. Brian’s daughter, Lexi, and her friend were with us this weekend which compelled me to get in touch with...