These Caramel Apple Trifles are the perfect apple treat – no bake, super easy and full of cinnamon! It’s also my last recipe for Apple Week. 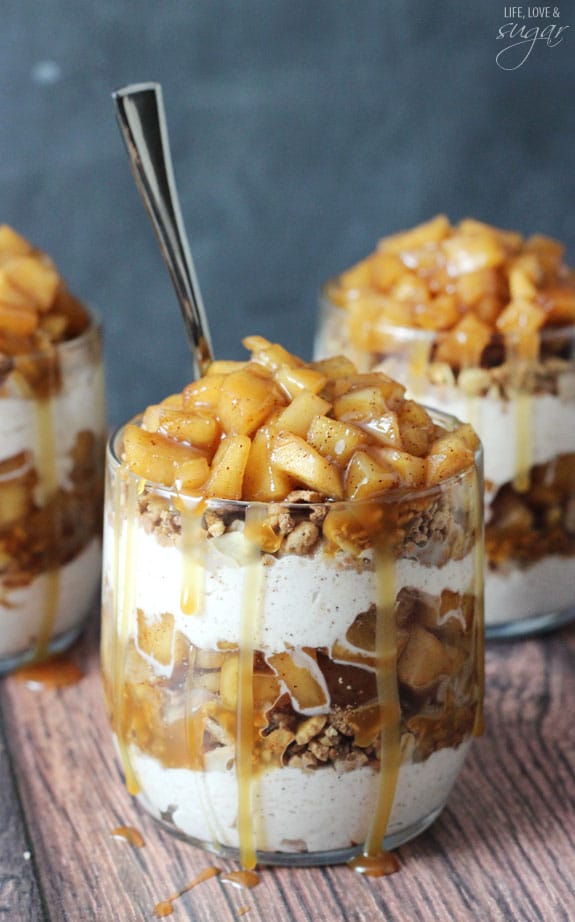 So the craziest thing happened the other night. I was sleeping peacefully when all of a sudden the tv in our bedroom came on. Immediately I turned to accuse the hubs of waking me up. I was ready to banish him to the living room to go watch that tv. I had my death stare ready to go but when I looked over at him, he was passed out cold. Not even moving.

I called his name and woke him up and asked him if he’d turned on the tv. Perhaps he’d turned it on and was pretending to be asleep? Maybe it was a bad joke?

Nope, it wasn’t him. And when I located the remote, it clearly wasn’t within his reach.

So the tv had just turned on all by itself. We had two dogs in the room with us (dog sitting my brother’s dog) and neither of them budged, so it didn’t seem like anyone was in the house.

We went back to sleep and still don’t know what it was. It didn’t really even register with the hubs just how creepy it was until the next morning. I’ve decided it was Casper, the {hopefully} friendly ghost. Maybe he just wanted a Caramel Apple Trifle and was trying to get my attention?

These easy, no bake trifles have two layers each of the following:

Can you tell I’m addicted to cinnamon? This is my preferred granola. I use it in my yogurt. But if you have another that you prefer, be my guest. I’d just recommend that it has cinnamon in it.

The whipped cream is homemade and super easy. I could eat it on its own with a spoon.

And I made my own caramel, but it’d be easy to replace with a store-bought one, if you prefer. It’d make these even easier to make, which I’m totally down with.

The cinnamon apples are baked right on the stove. They probably are the most time intensive part of this, simply with all the chopping. Totally worth it.

These would be great for Thanksgiving! With all the cooking on, these are an easy but pretty dessert that can be made ahead of time. I’d actually recommend making them at least a few hours ahead, giving the granola a little time to soften up. I love the combined texture of the slightly crunchy granola, apples and creamy whipped cream. Perfect! 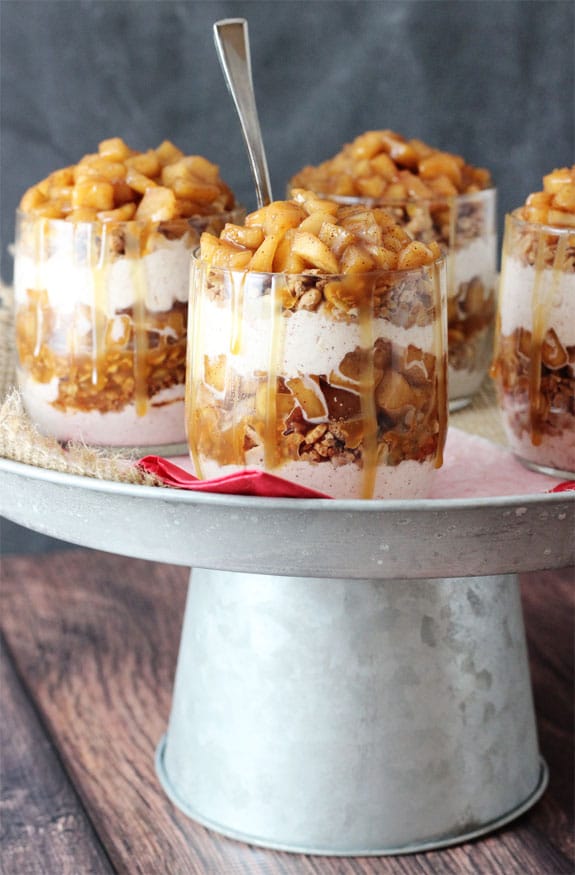 1. To make the caramel, add the sugar in an even layer to the bottom of a medium saucepan.
2. Heat sugar on medium-high and whisk until the sugar has melted, about 5 minutes. The sugar will lump together, but eventually melt.
3. Continue whisking until the temperature reaches 350 degrees or the sugar has turned an amber color. It will reach 350 degrees very quickly after all the sugar has melted. Watch it very closely. It goes from nice caramel to burned very quickly.
4. Remove caramel from heat and add butter. Whisk until melted and combined. Mixture might bubble a bit.
5. Add the heavy cream and whisk until incorporated.
6. Cool caramel to room temperature.
7. To make the apples, combine apples, lemon juice, nutmeg, cinnamon and brown sugar in a medium pan and toss to coat.
8. Add butter and cook apples for about 15-20 minutes, or until at preferred softness.
9. Allow to cool for 15-20 minutes.
10. To make cinnamon whipped cream, freeze a metal bowl and whisk attachment for 10-15 minutes.
11. Remove bowl from freezer, add heavy whipping cream, and whip on high speed until it begins to thicken.
12. Add powdered sugar and cinnamon and whip until it you get stiff peaks.
13. Once everything is made a ready, build the trifles.
14. Pipe an even layer of whipped cream into the bottom of the cup or jar you are using.
15. Add about 2 tbsp granola in an even layer.
16. Drizzle caramel over granola.
17. Spoon apples over caramel.
18. Repeat layers 14-17, then drizzle more caramel over the tops of each trifle.
19. Store in the fridge for 2-3 hours, or until ready to serve.
*You can replace the caramel sauce with a store-bought sauce, if preferred.
Source : lifeloveandsugar

I almost didn’t post these because the pictures are so meh but seriously you are going to LOVE the flavor of this zucchini so I had to share anyway! Plus, they are incredibly easy to make! Yes, zucchini can be kind of bland and boring but when you brush it with a garlic lemon oil...