It happened. Something I thought would happen eventually with two boys. We had our first broken bone this weekend. 🙁

Poor Baby Bee ran down the hallway, his brother started after him, and boom, down Baby Bee went and from the way he screamed, I knew something was really wrong. Once we got him to calm down a bit, he tried to stand, and he said, “I can’t! I can’t stand!” and crumpled to the ground. Ugh! It was awful. Off to the ER we went, and the doctor suspects a break in the growth plate in his lower leg. So he has a HUGE hard cast on his little leg – all the way up to the hip. My poor baby!

So now we have to follow up next week with the orthpedist and then we’ll find out how long the cast will be on. There is a possibility that it’s not as bad is it seems, and the cast won’t have to be on for as long, so we are praying for that!

I hope that your weekend was better than mine! And if not, maybe some cupcakes will cheer you up? 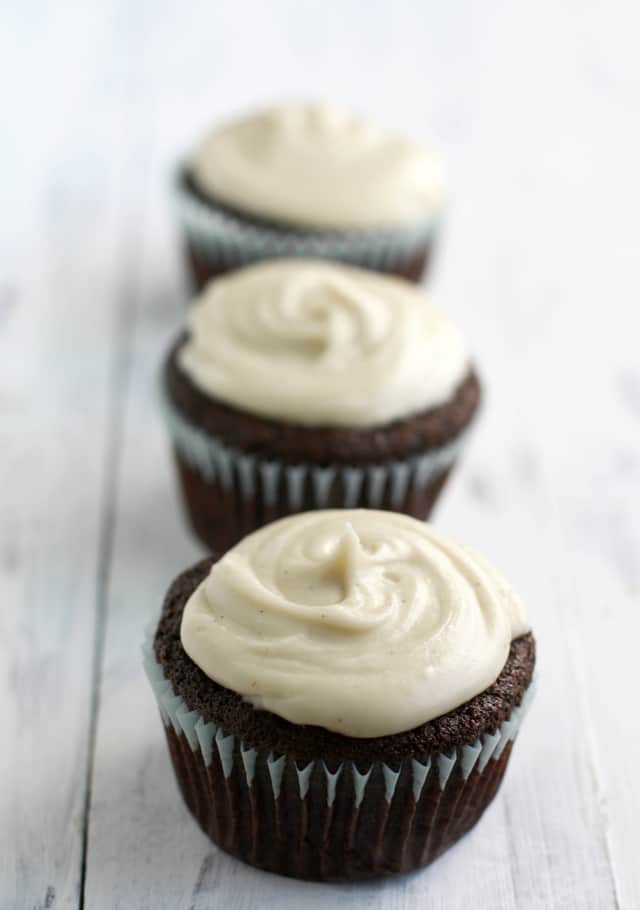 These classic chocolate cupcakes are so easy to whip up. I’ve made them with regular flour and with gluten free flour, and they work very well both ways. My current favorite store bought gluten free flour blend is Pamela’s Products Artisan Flour Blend

, which I’ve been able to find at Kroger and Meijer. (affiliate link) I think that it works very well in cake and cookie recipes.

This buttercream frosting is made a little bit more special with the addition of vanilla bean. If you don’t have a vanilla bean on hand, you could substitute a teaspoon of pure vanilla extract. But I do like seeing the tiny little flecks of vanilla bean in the frosting. It makes me happy.

Come Fall, I take comfort in fuzzy boots, soft sweaters, and GIANT bowls of spicy, slurpy soup. And although September is hardly the heart of the season, I say it’s never too early to start filling up our recipe boxes with easy, healthy, cozy soup recipes. I’ll hold off on the chili for another month...

This tortellini, spinach and chicken soup is a delicious meal made all in one pot that will leave everyonesaying yelling, “THAT WAS GOOD!”  No seriously, that’s what we all said (kids and adults alike).  If I could eat this soup every day this winter, I would be happy. You guys, this is a soup that you...